– Getting Dressed sequences – IWB resource with items of clothing on, to talk about getting dressed. Ideally

use a box of dressing up clothes for pupils to put on themselves, or you can use this Scratch activity: Getting Dressed on the whiteboard. Discuss what items the pupils would put on first in the morning, and why you need to put socks on before shoes etc. After introducing idea of there being a sequence to what you put on, I asked the pupils to put talking postcards with the images of the clothes in order. We also had some extra items like wellies and sun hats to introduce selection with more able pupils (if it is sunny, then put on a sun hat).

– This was followed by some musical programming using a Scratch program I created. You can see it here. We began with me getting a pupil to play Row Row Row your Boat, by reading out a sequence of colours (there is also a second activity here based on shapes in high contrast for any pupils who struggle to see the colours). Each pupil then had a turn to create a sequence of colours using cards, which they then stuck to the board with blutack and played. We talked about writing a program to make a tune.

– It was then time to start working with the Beebots. I showed each button in turn on the whiteboard, and had the pupils moving forwards, backwards, left and right as we went through them. I 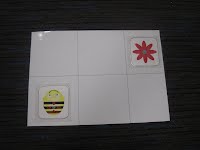 introduced the ‘Go’ command and emphasised that this had to be pressed to make the Beebot move. We then did a Simon Says type game, holding up laminated command cards, whereby the pupils should only move if the ‘Go’ card was held up with the command.
– They then sat around the table with a single Beebot and a 2×3 grid (see image right). I had a card to represent the start position of the Beebot, and one for a flower that it wanted to get to. We started with the flower on the next square in front of the Beebot and talked about writing a program to get it there. I had all the Beebot commands laminated with the Communicate: in Print symbols on the reverse (for download here). On each card there were dots of velcro so that they could be attached in a line to make up a program. We worked from top to bottom, always finishing with the ‘Go’ card, and once the program had been written, someone would enter it onto the Beebot and set it going. The pupils worked really well with this, and we gradually made it harder and harder by moving the flower. The less able pupils could help with entering the program, whilst the more able chose the correct cards.

– From here you can move onto larger mats working in smaller groups, adding obstacles, or squares that must be visited on the way to the destination.You can also use the Beebot app on the iPad for reinforcement.

It was really useful to try out some ideas with a range of pupils, and see what worked well. The clothes activity would

definitely have benefited from using real clothes, as the images were a bit too abstract for some of the young people. I was impressed how quickly they picked up using the Beebot and writing programs using the cards, although the left and rights caused some issues (mainly because the pupils were sat around the mat rather than just on one side). In lesson 1, the remote controlled bugs were difficult for some pupils to control, but they still managed to get them moving around the classroom. The Beebot offers more control as you can move just one step at a time. The pupils were generally very engaged throughout the activities, and everyone took part.

Thanks again to Talbot and Stubbin Wood Schools. I’m hoping to post some video from the former once we have the permissions sorted out.